Truthfully, at one time I didn’t know there was a difference between bees and wasps. One day, I was camping and heard buzzing. I thought bees were dive-bombing me.  I zipped myself into my tent and waited for them to leave. They did not. I had a Styrofoam cooler outside my tent, and the bees seemed to be tearing little pieces of the material off the ice chest. I could actually hear the ripping noise.

I found out later from another camper that the insect was a wasp. There was meat on ice inside that cooler that I had been eating previously. The wasp must have smelled it. I doubt the wasp knew it was in the Styrofoam ice chest. I learned later that some wasps use wood, and plant stems mixed with their saliva to make nests. Maybe they use other materials as well. Perhaps I’ll never know.

A wasp is any insect of the order Hymenoptera and suborder Apocrita that is neither a bee nor an ant. Like bees, there are social wasps and solitary wasps. Wasps most know to us are Yellow Jackets, Hornets, Mud Daubers, Paper Wasps, and Cicada Killer Wasp. There is an estimated at over a hundred thousand different types around the world.

Social wasps are omnivores, eating both plants and other animals. Some wasps are social living in a nest with one queen and nonreproducing workers like yellow jackets and hornets. 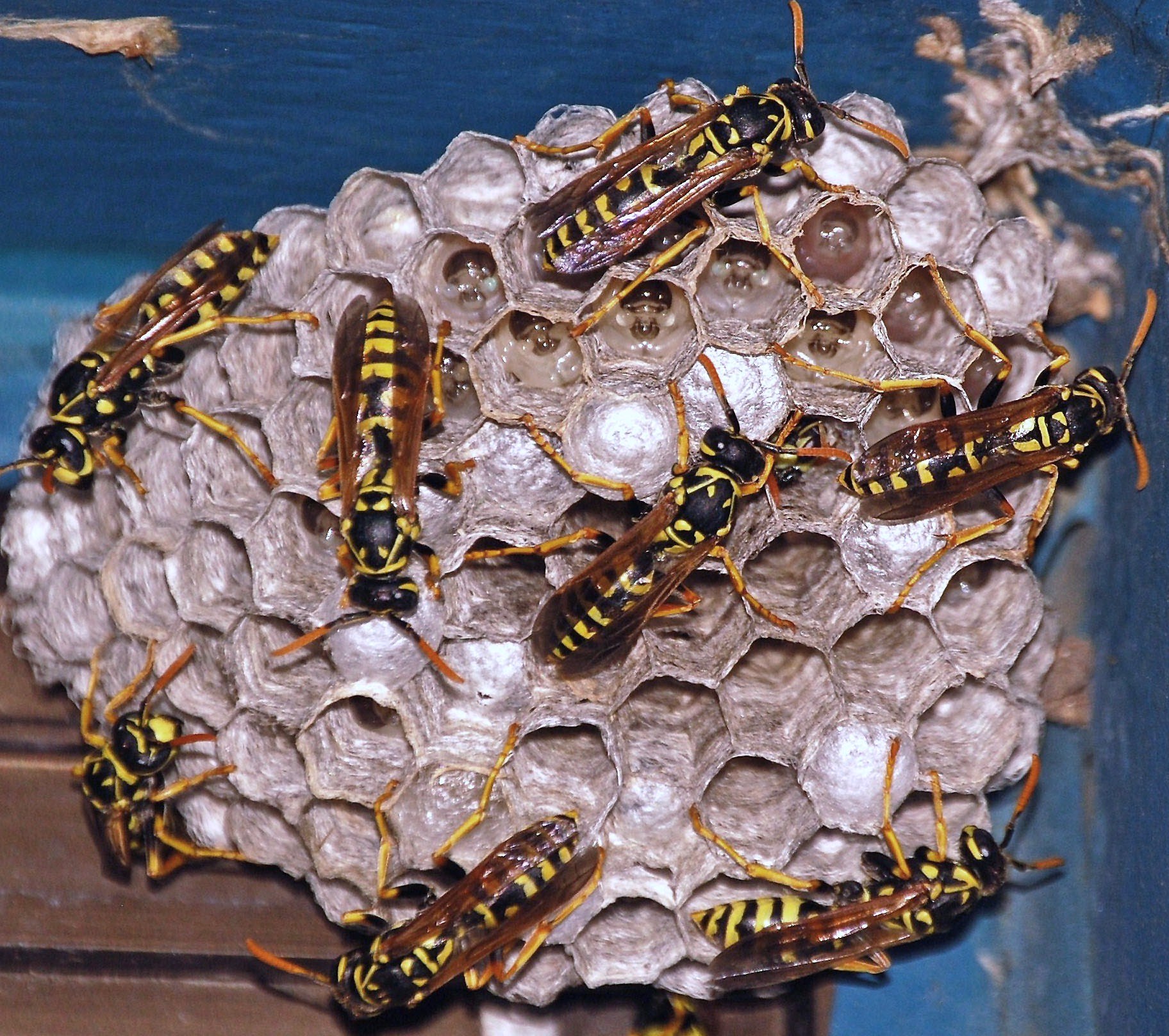 Solitary wasps are parasitoidal. They raise their young by laying eggs on or in other bugs, but unlike true parasites, the wasp larvae eventually kill their host. Some wasps will search for dead insects to nourish their larvae.
The difference between a wasp and a bee feeding its young

Bees are fuzzy and plumper, Wasp have a pinched waiste and are not fuzzy.

Wasps such as the Bald-faced Hornet only consume nectar and fruit juice. Yellow Jackets, on the other hand, will eat food we like as well.  You will find them hovering around as you barbecue hoping to get some meat or looking for a sweet sip of your ice tea or soda. Be careful not to swallow one drinking your soda pop. 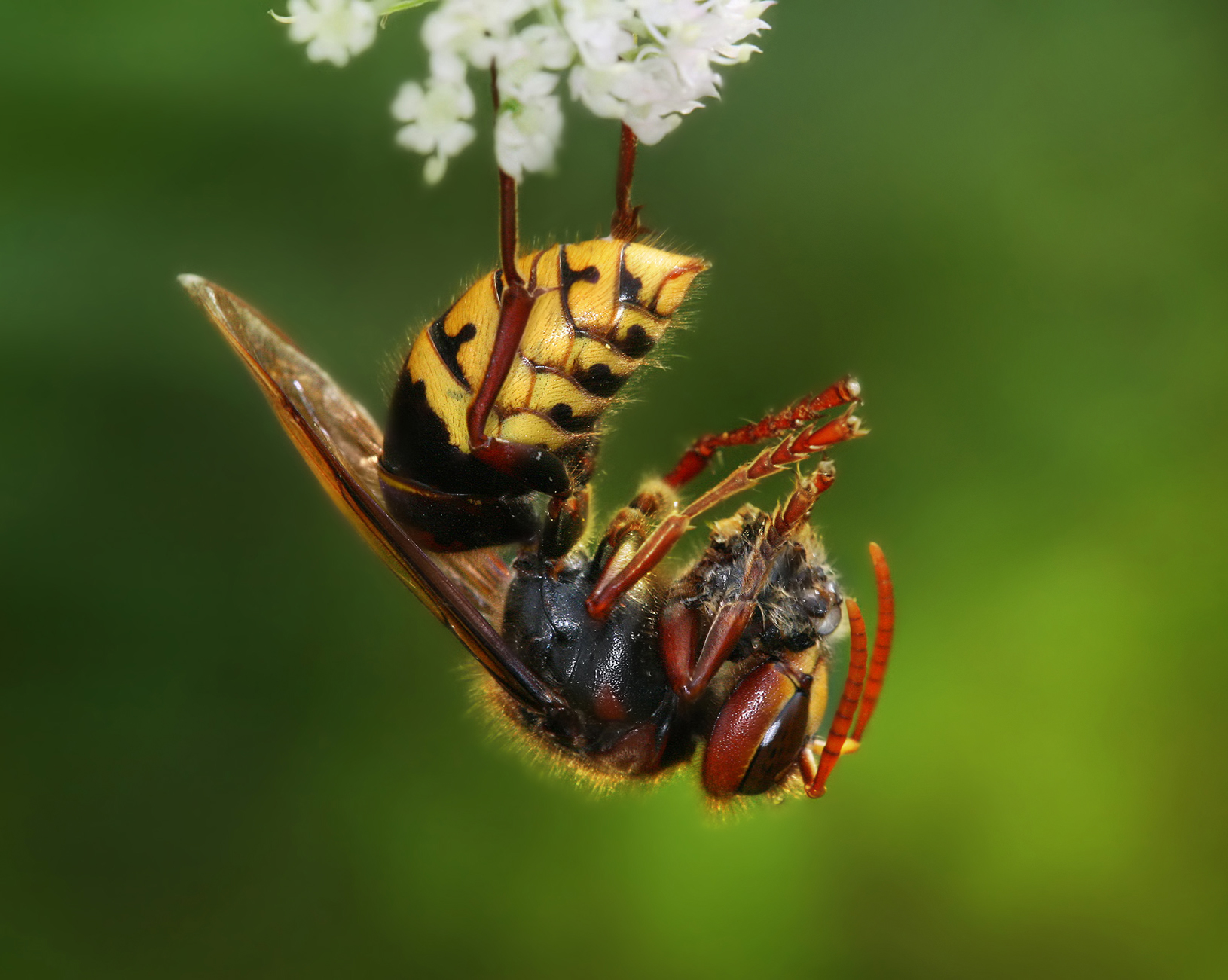 European hornet with the remnants of a honey bee.

Wasps like the taste of sweet and will invade honey bee nests to steal the honey and take the bee’s larvae.

Not only does the wasp have the ability to fly and sting, but they also bite.

Although less aggressive than a yellow jacket or hornet its sting is quite painful and may produce a potentially fatal reaction called anaphylactic shock in some individuals. Much like a bee, a wasp’s stinger contains pheromones signaling other wasps to attack you. Wasps can sting and bite repeatedly. Nests near human habitats are a hazard.

This is the reason many people believe that being “stung” by a wasp is much more severe than being stung by a bee. Although a European honey bee sting can be painful too and can cause an allergic reaction it dies after it stings.

I do not include the Africanized honey bee here in the information as there is a previous blog dedicated to them and their aggressive traits.
Wasps can be of use consuming flies and helping remove nuisance insects from farmland. 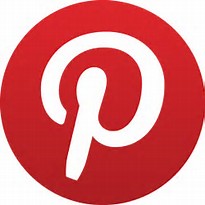 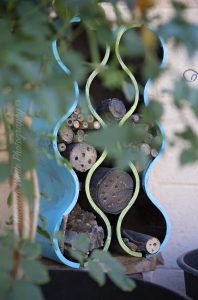